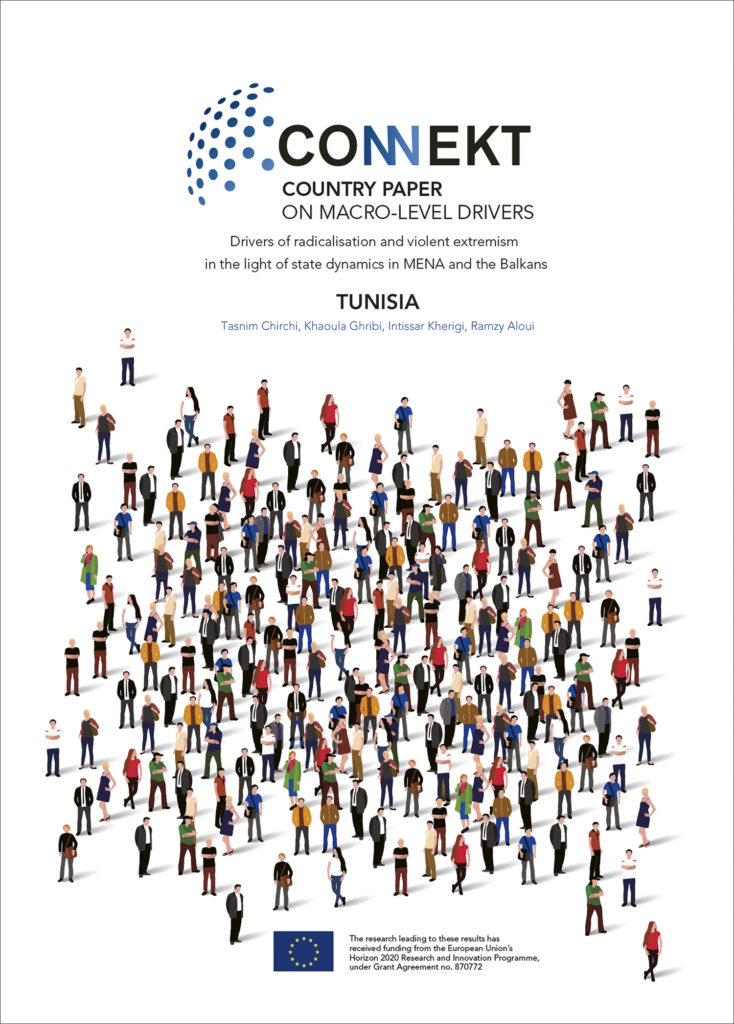 Violent extremism in Tunisia is not considered a new phenomenon as the country experienced a series of violent extremist incidents at various periods before the revolution. With the outbreak of the revolution against the Ben Ali regime, and in the atmosphere of democratic transition, the country witnessed a very changing and eventful climate, including a series of successive violent operations targeting security forces, soldiers and civilians. Although military and security institutions succeeded in dealing with most of these operations, this approach was not a viable solution that breaks with the phenomenon by treating it at its roots. It was necessary to join the efforts of the various state institutions and civil society institutions to address the root causes of the phenomenon rather than only addressing the manifestations of the threat.

This paper seeks to understand the relationship between policies, state institutions involved in countering radicalisation and violent extremism, including their strategic role and their daily routine practices, and the drivers of the phenomena of radicalisation and violent extremism. This understanding is based on an analysis of the results of field research consisting of a group of semi-structured individual interviews with a diverse sample of representatives of state institutions, academics and civil society activists, in addition to a stakeholders’ workshop that brought these representatives together. The research outputs were analysed via a qualitative data matrix.

The paper outlines the role of state institutions in addressing the economic, political and social dynamics that feed the drivers of radicalisation and violent extremism. The paper concludes that the failures of the developmental model in terms of regional and class disparities, and the political grievances caused by the state’s exclusion of individuals, groups and regions, represent the main drivers of violent extremism in Tunisia. The analysis of the research outputs also led to an explanation of the limitations to the institutions’ role in combating the driving factors of the phenomenon due to the slow pace of change in the approaches followed and the practices of institutions in the context of democratic transition.

The results presented are based on research work done in Tunisia within the framework of the wider research project CONNEKT: “Contexts of Violent Extremism in MENA and Balkan Societies”. The CONNEKT project explores seven factors that are considered potential drivers of VE (not as exclusive drivers but rather as a starting point for research) by analysing them at three levels: the state level, the community level and the individual level, and then looking at the interaction between the three levels. This paper addresses the first analytical level, which is the analysis of state policies and the work of its institutions in connection with the phenomenon within the Tunisian context.

The neo-institutionalism approach is used in order to analyse the impact of institutions and policies on the phenomenon of VE. This approach considers institutions as the locus of influence and change, and therefore explores the effect of the institutional system on the dynamics of change. It also defines the institution as a set of rules and practices that are arranged and embedded in structures of meaning and resources. On the one hand, these structures are relatively stable in contrast to the high turnover of individual actors, and, on the other, they are relatively flexible with individuals’ expectations and changing external circumstances (March and Olsen, 2008).

In this paper, an attempt is made to answer the following two questions:

These questions are answered based on an analysis of the results of the qualitative fieldwork conducted by the research team at the Jasmine Foundation for Research and Communication (JFRC) over a period of three months (from December 2020 to March 2021). The research was launched through two exploration focus groups and 20 one-on-one, semi-structured interviews with a sample of institutional representatives, academics and civil society actors that represents an important group of parties involved in addressing the phenomenon.

Following these interviews, the CONNEKT research team at the Jasmine Foundation engaged a diverse group of stakeholders in a workshop aimed at discussing the results of the one-on-one interviews in order to test the findings and explore their validity further. The workshop also made it possible to collect information from the sample about the role of the seven factors in driving the phenomenon of radicalisation and VE and the degree of influence of each factor on the phenomenon.

After completing the fieldwork, we moved to the stage of analysing the results by placing them in an analytical matrix that contributed to generating correlations and inferences that help understand the drivers of the phenomenon at the macro-level. This analysis enabled us to clarify the role of institutions in mapping the potential drivers of VE by showing the institutional process between the impact of policies and the effect of external conditions on institutional capacity.