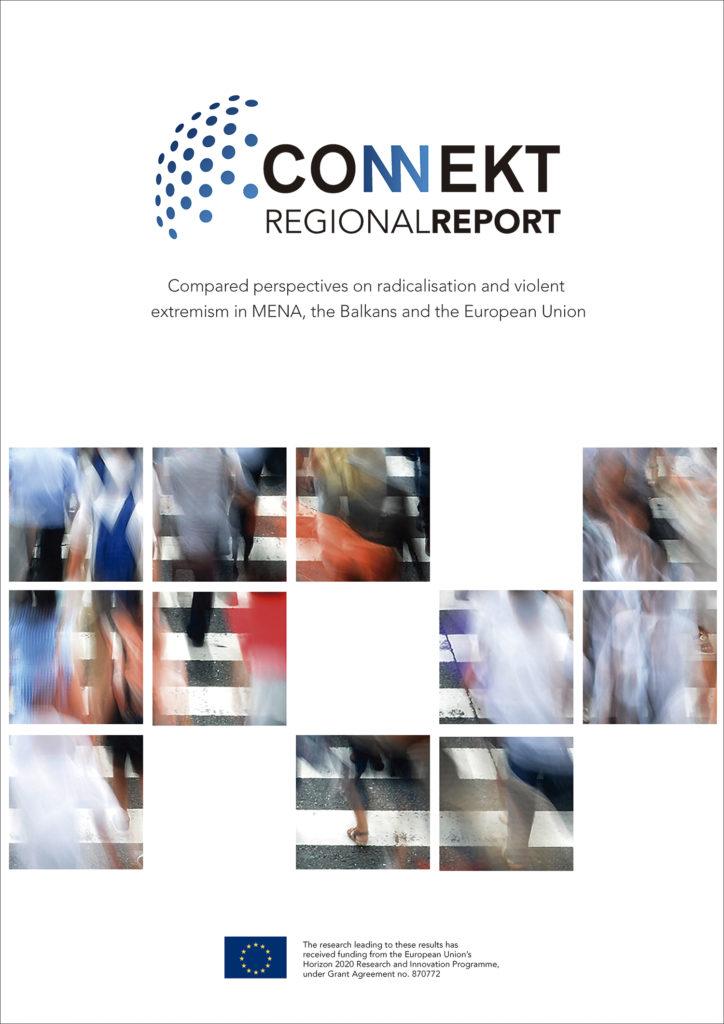 Radicalisation and violent extremism (VE) have received considerable attention from governments, media and civil society in Europe and the Middle East in the past decade, albeit to varying degrees.

The decision of thousands of citizens and residents from countries across the Middle East and North Africa (MENA) region and Europe to join and fight for Daesh (ISIS) in the mid-2010s has been an important catalyst for a transnational concern and reflection on the issue. Yet, the causes, dynamics, origins and responses vary greatly across the regions covered by the CONNEKT project. In some countries, radicalisation and government responses date back several decades. In others, incidents of VE were either previously limited or took a different direction and only became a subject of public debate in recent years. Furthermore, what is understood by radicalisation and VE differs and shifts both in terms of research and policy-making. While in recent years, radicalisation and VE have often been treated synonymously with radical and violent movements which base their claim on religion, in particular a militant understanding of political Islam, there are other radical and violent movements across the regions covered, both historically and currently. These include far-left and far-right movements, nationalist groups and other extremist groups that have committed acts of violence.

The background against which radicalisation and VE takes place also varies across the regions and countries. The nature of government differs with the range from authoritarian to liberal democracies, including a number of hybrid regimes that combine different authoritarian and democratic features. The socioeconomic background also differs, with disparate levels of social and economic inequality, overall prosperity and different dynamics of growth. Finally, the recruitment basis for radicalism differs greatly, depending on the types of radical movements and the countries. Radical nationalist movements have been recruiting from majorities and minorities. Minorities at times of minority marginalisation and repression, as in Kosovo and North Macedonia during the 1990s and early 2000s. Radical majority nationalist movements are closely linked to a rise of the far-right and anti-immigrant rhetoric. Islamist extremist groups and associated radicalisation are also shaped by the demographic picture. In some countries, minorities have been the main recruiting ground for radical and extremist groups, as is the case in the countries where Muslim communities constitute a minority, such as North Macedonia (Kambovski, Georgieva and Trajanovski, 2020) or Bulgaria (Dzhekova, 2020). This mirrors the pattern of recruitment in the European Union (EU), even though the Muslim minority groups in the Balkans have not been a product of migration during the past decades. In both cases, the religious background mattered more than specific levels of religiosity within families or communities. In other cases, it is the majority population that has been the most vulnerable, particularly in reference to religion and also to age group, for instance in countries with a growing young population, where youths are particularly vulnerable to radicalisation, such as Egypt (Pinfari, 2020) and Kosovo (Peci and Demjaha, 2020).

A comparative and cross-national perspective also needs to consider the transnational dynamics of radicalisation and VE. While the context is also national, it is strongly shaped by influences that are international. These include the lure of Daesh, which was able to recruit fighters from all countries covered in the project, but also the war in Ukraine (Kapidžić et al., 2020; Peci and Demjaha, 2020; Balkan Regional Report 2020) and other earlier conflicts (Afghanistan, Bosnia and Herzegovina [BiH]). It is not just conflicts acting as sites for recruitment; the reporting and narrative developed by the media which has contributed towards increased Islamophobia have also contributed to the radicalisation of individuals. Furthermore, transnational networks have been important in radicalisation and recruiting individuals for VE, facilitated by social media in recent years. Diasporas have also exposed communities to each other and acted as transmission belts of radicalisation.

In short, a comparative analysis across Europe and the Middle East, with a focus on the Balkans and the MENA region, helps to draw comparative lessons, but also to highlight transnational networks and to show that radicalisation and VE do not take place in a nationally contained environment. Responses are also transnational, as governments cooperate to fight VE and often engage in joint policies, as is the case with the Arab Convention for the Suppression of Terrorism (ACST) (see the MENA Regional Report). Civil society forms yet another angle as foreign governments, through embassies and funding schemes, are involved in funding civil societies in these regions with the aim of researching and advocating for certain responses towards VE and radicalisation.

(This report forms part of the publication – available on this website – CONNEKT Regional Report: Perspectives on radicalisation and violent extremism
in MENA, the Balkans and the European Union)