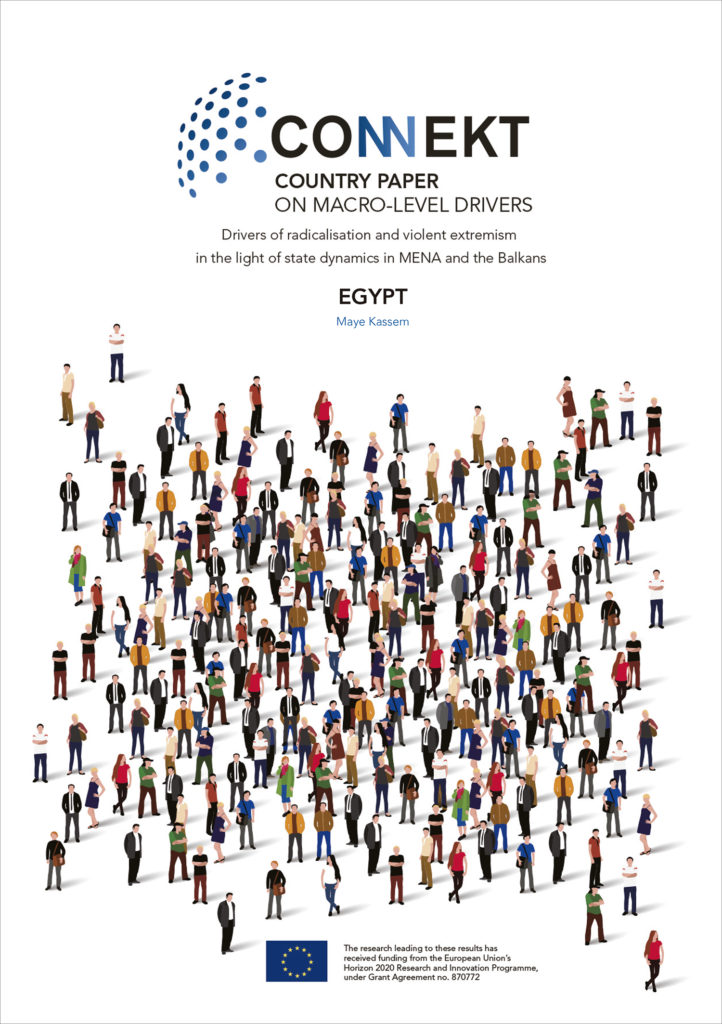 The purpose of this paper is to examine Violent Extremism (VE) in contemporary Egypt post 2013 to date. In particular, this paper seeks to explore the relationship between the various state institutions involved in countering VE, their strategic roles and the policies adopted and implemented. The method in which major civil organizations participate in, and contribute to, this objective will also be addressed. The findings of this paper are the results of the research conducted by Dr. Maye Kassem (PI) and a team composed largely of Political Science graduates on behalf of the American University in Cairo (AUC) over a period of three months (April – June 2022) and that culminated in the writing of this report in May/June 2022. This research has been conducted as part of a wider research by H2020-funded project CONNEKT (Contexts of Violent Extremism in MENA and Balkan Societies). Comprising three different stages of research and fieldwork, the objective of CONNEKT is to produce a consolidated framework of the drivers of VE, the manner in which such drivers interact, and subsequently provide policy recommendations regarding the prevention of radicalisation and violent extremism in the aforementioned regions. This project focuses on three levels of research (Macro, Meso, and Micro) to analyse and better fathom each country under study. This analytical paper comprises the first level (macro-level) of research, which, put simply, examines the dynamics and workings of State institutions and their agencies. As such, the theoretical approach of neo-institutionalism constitutes the framework of analysis in this paper. In other words, identifying the policies, dynamics, and implementations of these policies by State institutions and top tier organisations, will allow us to better comprehend the approach in which the stakeholders tackle the issue of VE in Egypt and to what ends. As one scholar states:

Institutions are important, because, as entities, they form such a large part of the
landscape, and because modern governance largely occurs in and through institutions.
Institutions also matter because they (or at least actors within them) typically wield
power and mobilize institutional resources in political struggles and governance
relationships. Institutions are also said to matter because they are seen as shaping and
constraining political behavior and decision making and even the perceptions and powers of political actors in a wide range of ways (Bell, 2005).

It must be emphasised here that for the purpose of this project, historic, current, and potential future VE in Egypt needs to be considered against the underlying background of the circumstances of, and influences on, the more than 25 million youth between the ages of 15 and 30 years old (or more than 35 million between the ages of 12-30 years old). The sheer number of youth in the qualifying ages of the project and the geographic scale of the country (over one million square km) means that simplistic ‘one size fits all’ interpretations and recommendations are unlikely to be valid. Instead, as CONNEKT project progresses phase by phase, it will become necessary to adopt finer-grained analyses. The need for further analysis in the case of Egypt’s demographics is also apparent when one compares the total populations of the MENA countries selected for CONNEKT to that of Egypt’s population of 102 million: Morocco 37 million, Tunisia 12 million, and Jordan 10 million.

This paper will focus on the different efforts undertaken by major institutions and organisations within Egypt in tackling radicalisation and VE drivers, with specific emphasis not only on the combative-security perspective, but equally important on the economic, political, social, and ideological fronts. The results and conclusions produced in this paper are derived from numerous forms of research that include – but are not limited to – current laws pertaining to the subject matter of this paper, firsthand reports produced by official institutions and organisations, scholarly articles and journals, media coverage (both print and broadcast), and presidential and public figure speeches. These various methods of research were intended for the purpose of not only acquiring and framing the information available, but also as a fundamental preparation stage in order to create an informed base from which to conduct the in-depth interviews. Consequently, twenty-two in-depth (20 in-person and 2 online) interviews were conducted with numerous specialists and stakeholders. Chosen on the basis of their expertise in their respective fields, all interviewees have played and/or continue to play an active leading role in helping combating radicalisation and VE in Egypt –whether directly or indirectly– through the institutions and/or organisations they represent. The interviewees include, but are not limited to, deputy ministers, generals, religious scholars, directors of programmes, policy advisors, and professors of practice.

The purpose of these interviews was to consolidate the three principal research questions of this paper: